I bring my mother flowers on March 8 every year, even to this day. She likes all sorts of flowers, but mimosas are her absolute favorite, so that is what I try to get her no matter what. My generation has been taught to honor the women in our lives from an early age – mothers, grandmothers, sisters, female teachers, doctors and clerks in the local small business. We were raised to respect the sacrifices of brave women who have stood up and fought for female rights, not only of their time, but also for those of us who came after them. 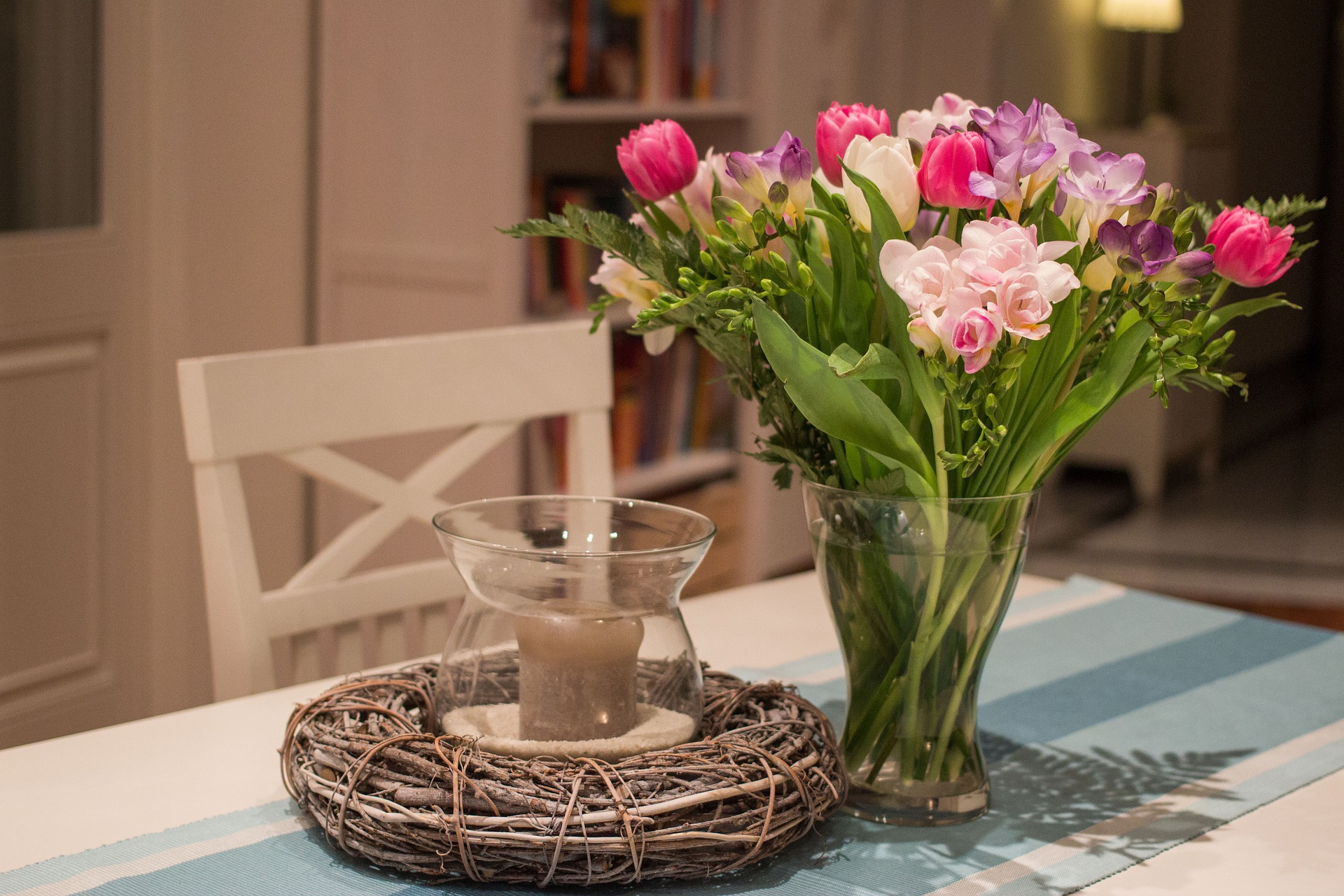 Every woman fights for her rights in her own way – in the public eye or in private. In celebration of those women and their struggles, we have decided to make a compilation of notable marketing campaigns with women at their center. 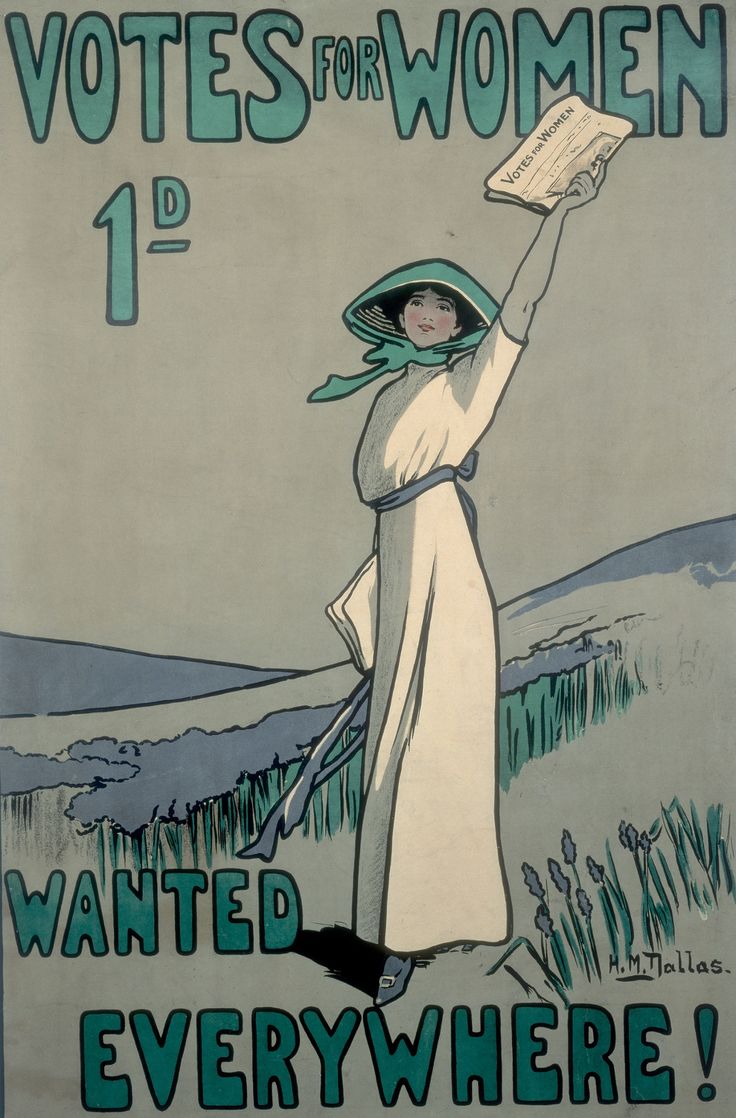 This poster from the Votes for Women newspaper – a suffragette one at that – from 1909 is a fine representation of the female empowerment efforts from 100 years ago. What is more, it is now considered one of the most iconic pictures of the suffragette movement, spurring on the creation of many more up to the point when women actually won the right to vote exactly 100 years ago – in 1918. Suffragists are considered by some “media-savvy political campaigners”, as they knew which images would work for press and gain a reaction from the readers. Some of them are now part of public displays, such as the one revealed at Cambridge University Library to mark the centennial of women gaining the right to vote. 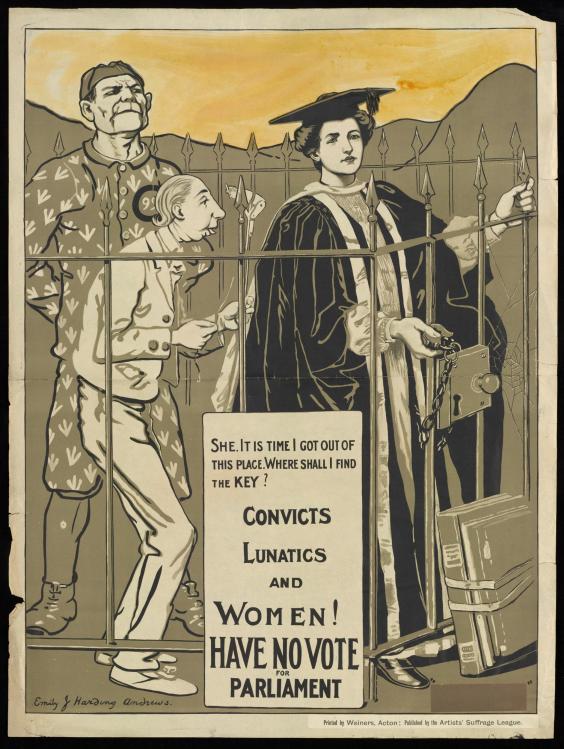 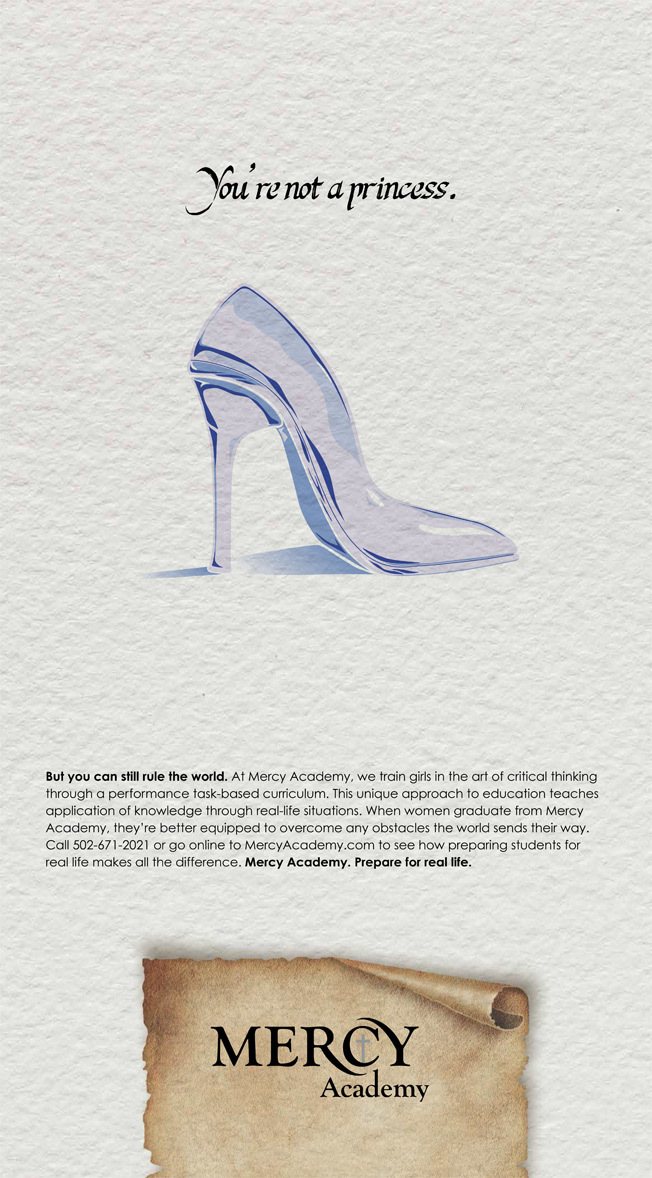 In 2013, a private all-female Catholic school from Louisville, Kentucky – Mercy Academy – commissioned a series of ad posters with unusual, but women-empowering messages: “You’re not a princess”, “Don’t wait for a prince” and “Life’s not a fairy tale”. The idea was that girls at the young age of 13 and 14 years old needed to hear that they were and could accomplish so much more on their own than as second-best to the men in their lives (as Disney would have us believe). Admittedly, it was a risky move, but since the school’s student body is growing, it seems that the message resonated with both teenage girls in the area and their parents.

In 2015, Women’s Aid, a UK domestic abuse charity, put up a billboard to point out a very serious problem – domestic violence. Only, it wasn’t just any billboard – it was an interactive billboard depicting a woman with her face all bruised and 3 words: “Look at me!”. Moreover, the billboard was equipped with facial detection cameras and a counter of sorts. The concept was simple – as people were passing by, they would (hopefully) look up at the billboard. The more people looked, the more the woman’s bruises would disappear from her face, in the end healing her and the billboard signing a message: “Thank you”. Such a simple idea, and yet with a powerful meaning that we can all help those who need it if we just look up. 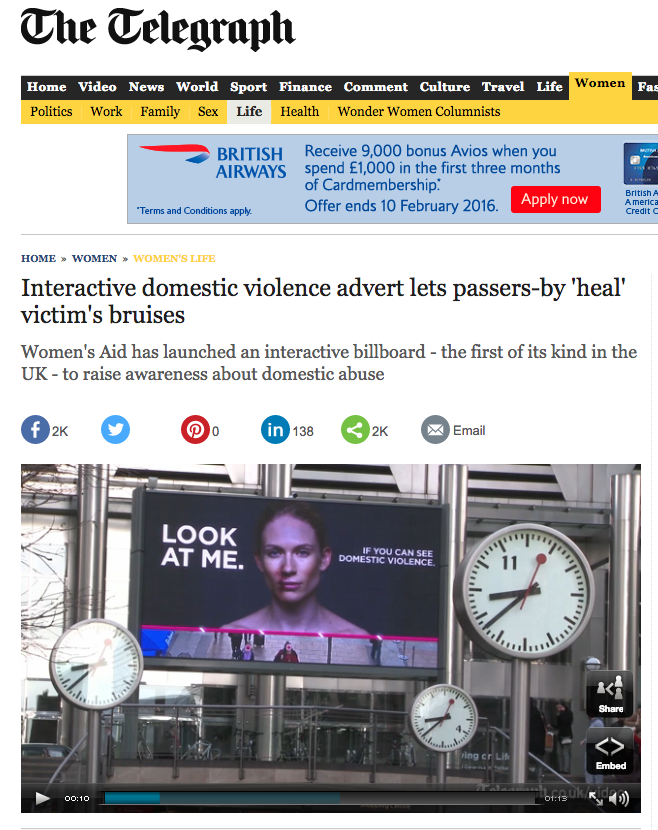 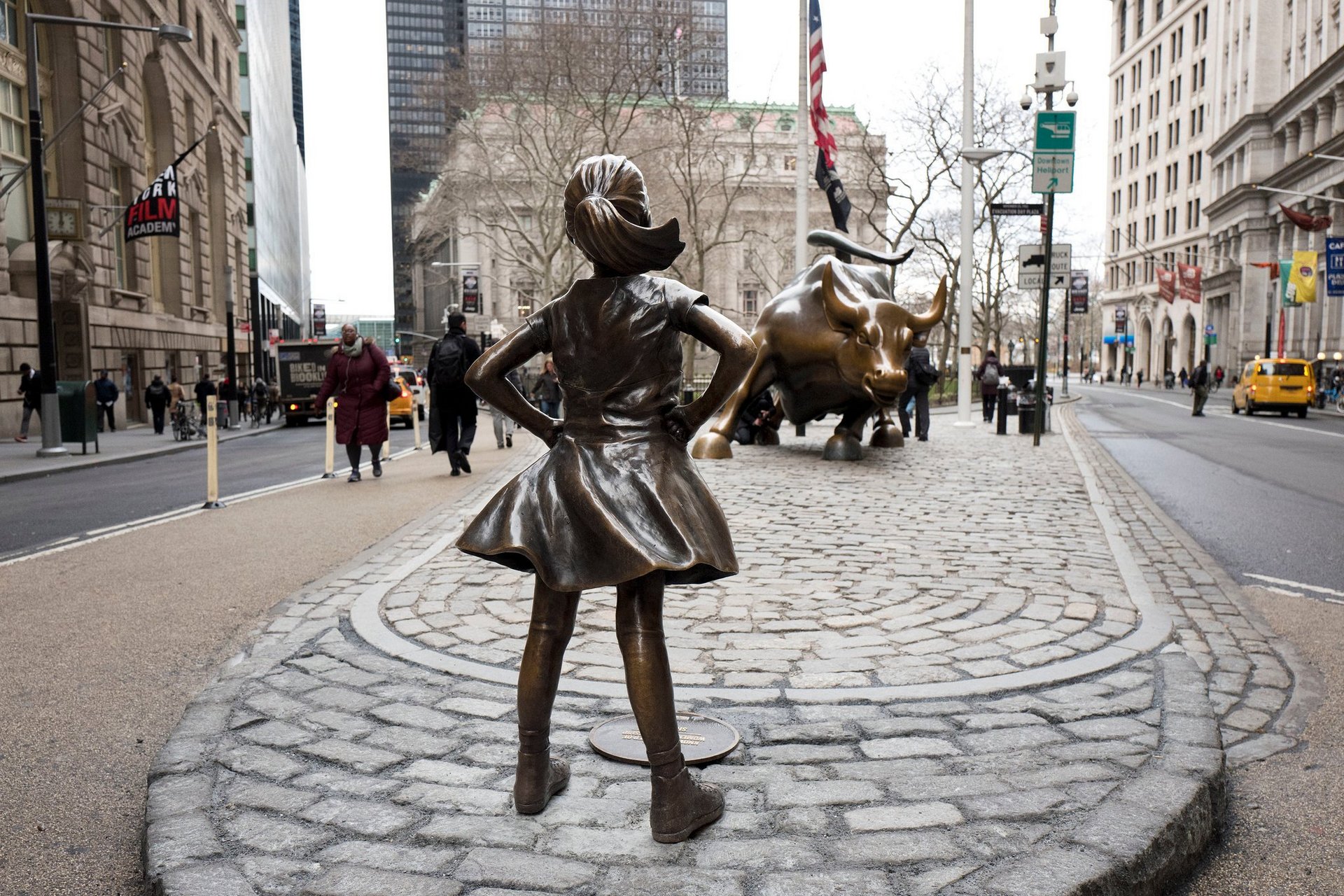 For International Women’s Day 2017, one of the top US advertising agencies – McCann New York – teamed up with State Street Global Advisors. The result of their work together was a bronze statue of a girl facing off against the famous Wall Street Charging Bull – a powerful piece of art meant to showcase the confidence women in places of power must possess and demonstrate in order to overcome the adversity in the workplace. The ultimate goal of the campaign was to gather attention around workplace gender diversity and stimulate companies to recruit more women to their boards. To that effect, the plaque in front of the statue says:

“Know the power of women in leadership. SHE makes a difference.” 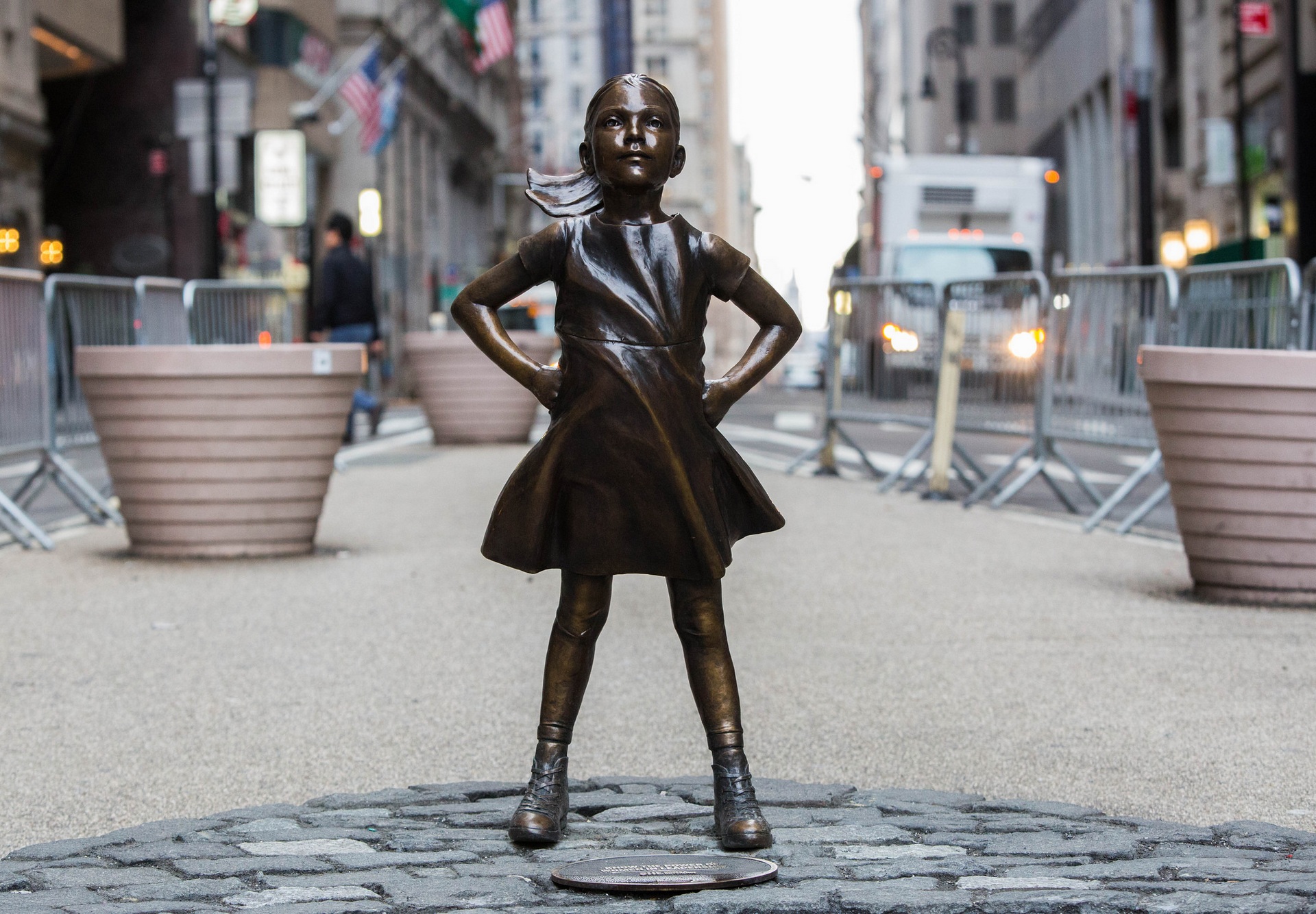 “Women Should Not Be Worth Less” Product Posters (2016) 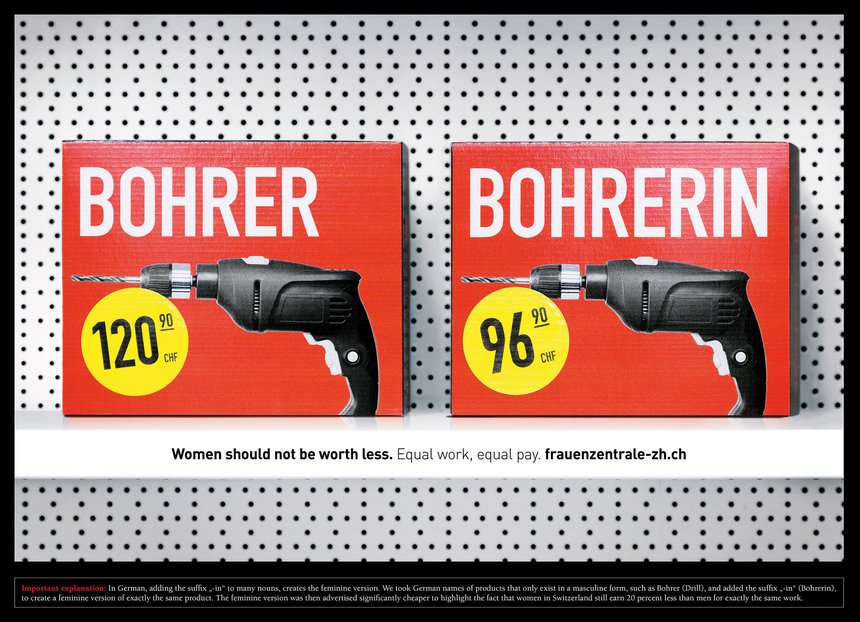 In spite of legal requirements, the difference in pay between men and women in Switzerland is up to 20% in favor of male population. In order to point the spotlight at this injustice and prompt adequate action, a Swiss marketing agency Publicis Communications Schweiz AG designed a series of product posters for several everyday products – drills, electric razors, headphones, toasters… They used language – adding the suffix “-in” to a product’s name to make a female version of it to show that the same product should cost the same with or without carrying a male or female name. Their slogan was:

“Women should not be worth less. Equal work, equal pay.” 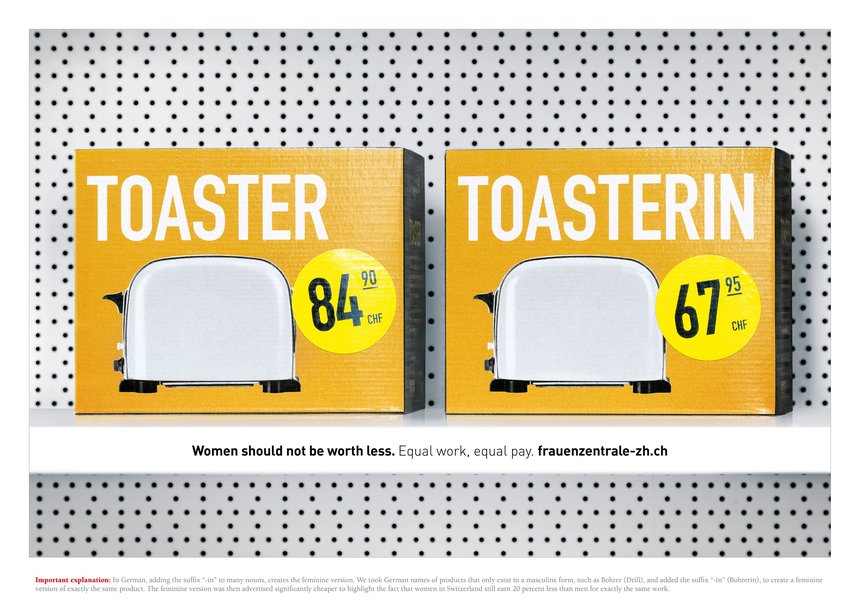 As part of the Dove Campaign for Real Beauty, the company released a series of short films, among which was Dove Real Beauty Sketches. A forensic sketch artist would draw women twice, without actually seeing their faces. One sketch would be based on a woman describing her own face, while the other one would be based on the woman’s description by a person she met shortly the day before. Upon finishing the drawing, the artist would meet the women, show them the sketches and ask them in which one they are more beautiful. In all the cases, the sketch with the stranger describing a woman depicted a more beautiful, younger and approachable person. The film ends stating:

“You are more beautiful than you think”.

Specifically for Mother’s Day, Dove continued the campaign with mothers and daughters, with daughters’ descriptions of their mothers inspiring more beautiful depictions than the ones provided by the mothers themselves. 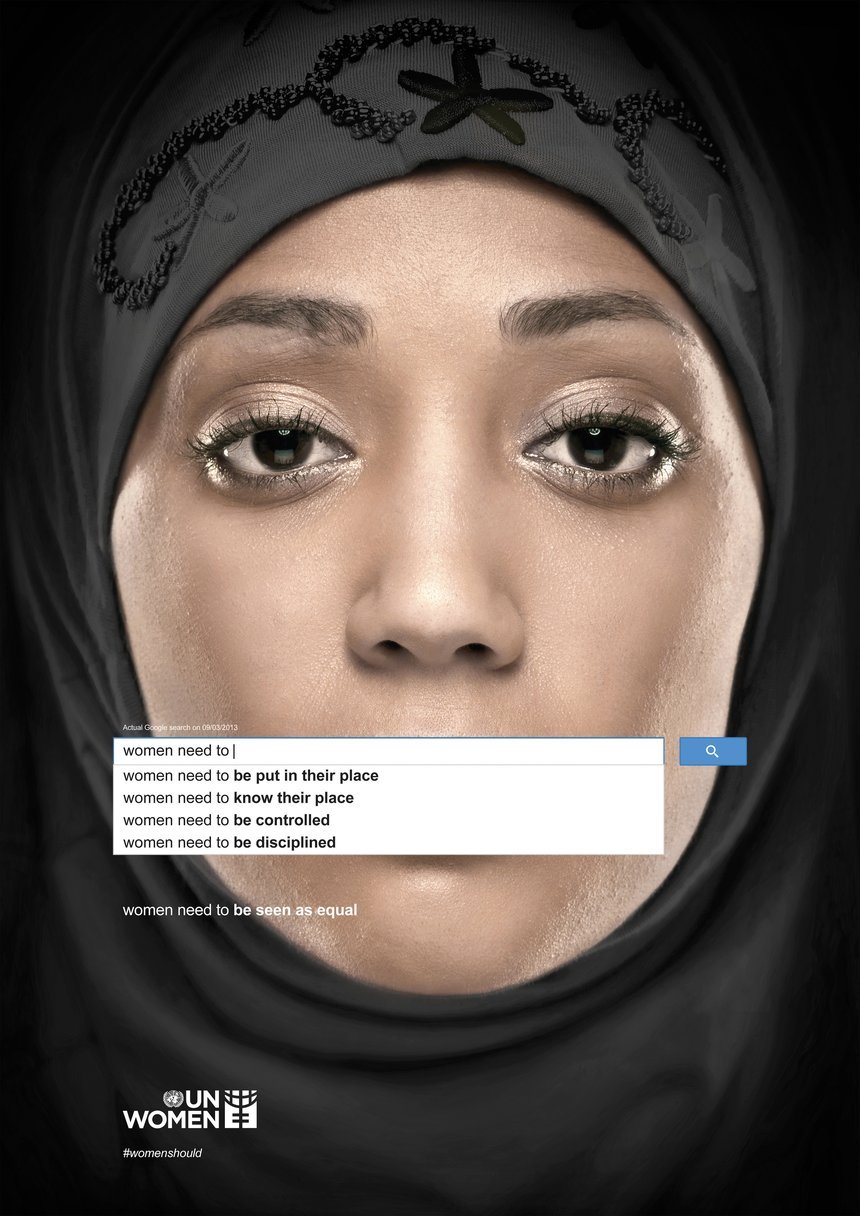 In 2013, a campaign was launched by UN Women with the goal of raising awareness about the social inequality between men and women. Even though the 21st century saw women gaining the right to vote, get an education, go to the army, work, fly in space, there is still a lot of discrimination and prejudice against them on the part of the male population. That was evidenced through a simple Google search autocomplete – as it reflected the most used search queries – that women are still thought of as undeserving of basic human rights to speak, move, or work freely. 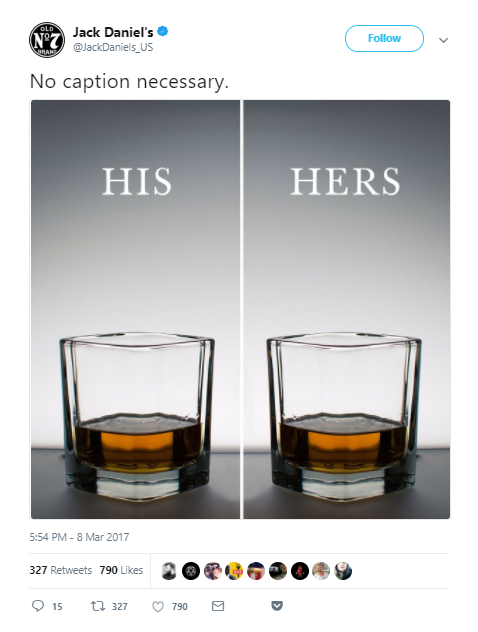 When a brand like Jack Daniel’s posts a clever tweet supporting women on International Women’s Day, it sends a message that they too deserve attention from a typically male product maker. That is precisely why a picture of two exactly the same whiskey glasses labeled as HIS and HERS with “No caption necessary” garnered attention not only from women but men as well. 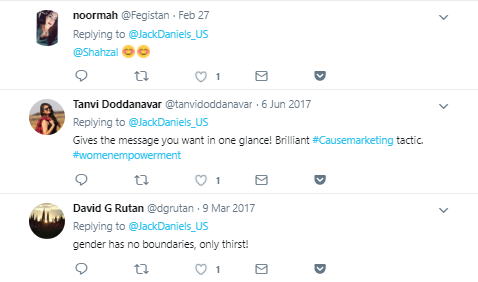 And there you go, folks! Women have been an endless inspiration not only to painters, sculptors and poets, but also marketers who wanted to deliver powerful messages regardless of language, culture or part of the world people live in. If you want our help in achieving that kind of goals in your business, contact us today!