Marketers have spoiled it.

Marketers have spoiled each and every good idea that has ever roamed the earth.

Before you start throwing rocks at me, let me explain first.

Marketers have this inclination for spoiling good ideas because they tend to exploit them massively and in such horrendous ways that sooner rather than later they get busted by those diligent Google guys. They have to invent algorithms to protect the Internet and its users from lousy marketers.

Google – hey, the machine! – has taken the role of a mediator which protects our humanness from those whose only wish is to sell and oversell.

Regarding guest blogging, first and foremost it was used for link building, as it provides some delicious link juice.

Marketers then started hunting guest blogging opportunities in exchange for money. SEO was on the verge to stop being a confirmation of quality anymore and to turn into a mere commodity that you could buy or sell.

Google put an end to this practice with PageRank algorithm, later followed by Panda. The bots learned how to read and interpret texts as well as the intentions behind them.

However, contrary to what Google’s Matt Cutts foretold in 2014, guest blogging isn’t dead yet. And judging by the abundance of guest posts all over the Internet, it won’t die.

Luckily, this world doesn’t revolve around quantity. Search engines have made it clear that you’re allowed to sell, but first, you have to deliver quality. In order to do that, there are things to do, places to see. And, as always, there is a considerable number of no-no actions.

Just like with everything else, the preparation phase is just as long and tough (if not more) as the execution phase. Some paperwork is waiting for you to conceptualize and fill in.

Considering the fact that you’re going to spend quite a lot of time before the paycheck time, you will want to be able to measure how much guest blogging will cost you in terms of time and effort.

Do make a guest blogging long-term strategy and break it into a few short-term ones. For example, in the first three months, you could aim to expand your audience by finding and reaching out to 30 relevant websites/blogs – and getting published at least once. Strategy means knowing your goals and identifying the means to achieve them.

Don’t aim too high with the expected results because the process is probably going be harder than you expect. You’ll be lucky if you manage to get one article published that first month. And you’ll have to burn the midnight oil many times for it!

Create a spreadsheet where you will track and measure your progress. It will help you realize what works and what doesn’t.

Once you’ve got your strategy and goal defined, it’s time to make a list of websites where you’d like to contribute.

Do determine which ones are relevant to your niche and rather successful (collaborations are great, but rewards in terms of higher traffic and lead generation are even better). This list could contain two categories: websites which are a tiny bit better than yours in terms of traffic and engagement, but also those which are better performing than yours. The former ones would “hire” you (or rather, let you write for them) based on the fact that you’re probably ready to offer them the same thing in return. When it comes to the latter – well, there’s nothing you can offer them except for good content. Really good.

Don’t make use of those ready-made lists of blogs and websites that you can find on the Internet. What good are marketing blogs (which are, by the way, quite eager to accept new challenges) if your website is about golf playing? You need those websites to lend you their audience. That’s why you should find some blogs or online magazines which are relevant to you. The magazine option is even better to position you as an influencer.

“Hi there, I’m a young writer who needs a little bit of support…”

No, it’s way too soon for this, young lion. (And it’s wrong, for the reasons I’ll explain later.)

What’s that first thing that blogs were made for?

No, not to enhance website traffic or leverage lead generation.

They were made because people have something to say.

Do treat them as content hubs that they are, sift through their existing content, see what they are doing, what’s there and what isn’t. Start interacting by adding comments, sharing their content (with tagging them, of course). Be in their face without being annoying – in other words, get acquainted with the authors through knowing, respecting and interacting with their work.

Don’t just write them “What a great post!”. They don’t need your confirmation that they are doing things right. Act like a human being and a professional who wants to build a firm basis for a relationship that’s going to last.

It would be ideal to make them read some of your content that’s already published. Guest blogging is not going to be just another opportunity for link building. You have to build links before you actually make an agreement about guest posting.

4) Reach out to them via email

After you spent some time on making the impression, the time has come to send a pitch.

Don’t ever start an email with “Hi there”. The person you are contacting has a name. Learning it is the least you can do in order to make them listen. Also, it’s a bad thing to let them realize the reasons behind this – that you’re desperate for more traffic or exposure.

Don’t make yourself or them the center of the conversation. The topic is what matters. Keep the explanation quite simple: you like their blog (especially X, and it helped you in Y or made you think Z). It’s meaningful and valuable because XY, and you would like to add XYZ. Put things in context.

Do add some links to your best and most relevant content, as well as the topics you would like to write about. Remind them you’re an avid reader and refer to some meaningful conversations you’ve had if any. Some meters and stats of your previous blogging successes won’t hurt either. Among tons of useful advice about outreaching, this one from Ahrefs blog wraps up the most important points and explains the most common mistakes.

Writing an outreach email is much like writing a cover letter for a job application. Actually, it’s even trickier. Employers are in need of you as a candidate, whereas editors can do without you perfectly well. You’ll have to try that much harder to deserve not to be tossed away into the Recycle Bin.

And do you know what’s one of the main reasons why many job applications are rejected before even meeting the candidate?

As a result of the cover letter’s generic tone. People often write a template (or even worse, download it from the Internet) and send it out, changing only names and a couple of more variables. 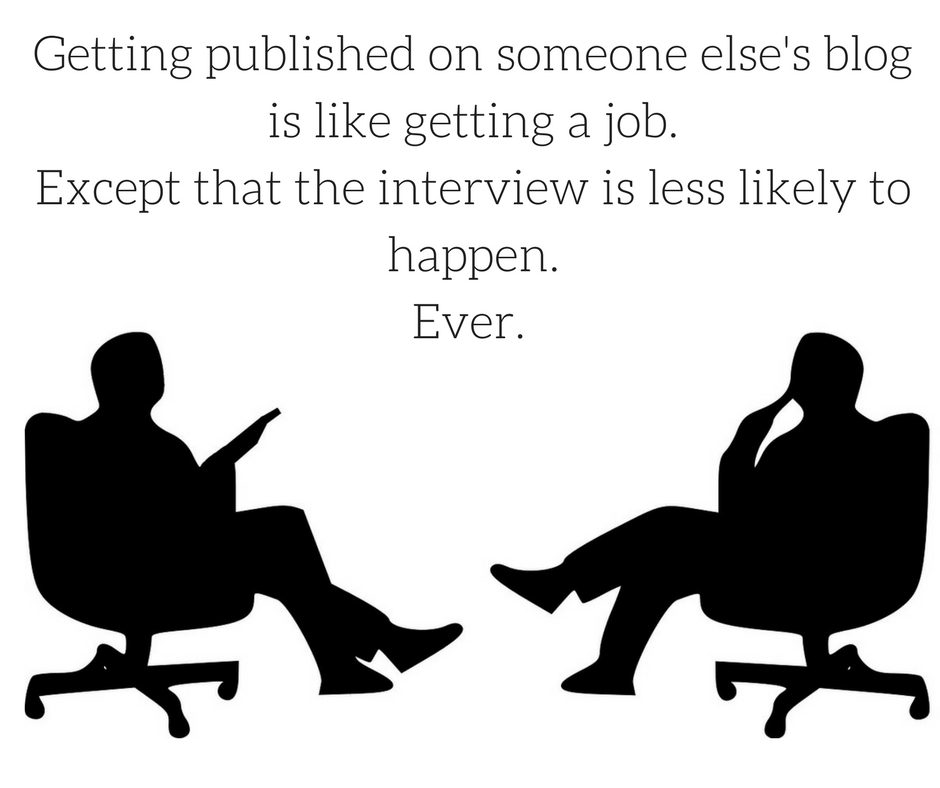 Do make a template or outline for your outreach emails.

But don’t use it in a generic way so that editors immediately realize you’re sending them exactly the same pitch as to a dozen other people. They know this is what people do, but making it obvious is a sign of sloppiness and negligence.

We won’t provide a template sample for you. There are many decent examples out there, but it’s best to try and create your own. If it’s good, you’ll reap the reward. If it’s bad, you’ll learn from it and make it better.

What was this all about? Oh yes! Writing!

6) Now for the reward… or most often, not

Again, it’s like looking for a job. As much as you want to get it and show your skills, the majority of people just won’t mind. Many of them won’t even bother to read your pitch.

Prepare yourself for a whole lot of ignoring – and fret not because it is a regularity you’ll quickly get used to. There’s a widespread opinion that’s only half true: Acquiring a high-quality article is an opportunity no editor is gonna ditch, no matter who it comes from. This is only partly true because there are lots of excellent writers and articles out there. Editors have so many things on their plate that they are overwhelmed rather than lacking in opportunities.

Don’t despair; the situation is not hopeless yet. If you think your pitch wasn’t good enough – fix it. Editors receive dozens of outreach emails, which means there are many great competitors fighting for that minimal amount of attention. Maybe you just weren’t lucky.

Be that as it may, do try to learn something new from each of the fails, even those which don’t prove anything. You’ll eventually get published as a guest of a powerful blog, and it will be worth it.

7) Writing the actual guest post is only the 6th step…

… But it is maybe harder than the previous five put together.

Once you’ve got the editor’s attention and trust, you have to justify it. There actually is something worse than getting rejected before you even start writing – getting rejected after submitting the article!

Don’t write an article as if you would do it for your own blog. You are not a star of someone else’s blog and guidelines aren’t there for nothing. Read and implement them.

Study the style of their published blog posts, their own as well as their guests’. Do try to adjust your style – every blog has its own preferences. Maybe it is more formal than yours. Maybe they absolutely adore and encourage in-depth 10.000-word articles. It’s you who should determine the winning combination and showcase your skills.

The article has to be fully edited, proofread, formatted, SEO optimized, with all the materials included. To make it even more convenient for publishing, you should also make an HTML version of it.

Harvest time. Not only will you enjoy watching your traffic and engagement stats go wild, but many doors will open for you once this first guest blogging attempt succeeds.

If your post was deemed good enough to be published, chances are the editor in question will ask for more. Congratulations, you’ve just raised the bar for yourself!

Do expand it and aim a little bit higher this time. After all, you’ve got some sweet ammunition now.

Got some more advice about guest blogging? Let us know in the Comments section. If we like it, we might as well ask you to write a guest post for us. 🙂